Bernina is a highly esteemed company from Switzerland with a long history of making quality sewing machines. Bernina prides itself on being top on the list of best sewing machine manufacturers because of the innovative and carefully designed machines guaranteed to provide durability, comfort, and effectiveness.

Bernina is so confident in its machines that it usually prices them much higher than the average market price. Still, the brand’s loyal customers continue to support the company, knowing that they will get premium products.

The company’s origin starts with an invention. In 1893, Swiss inventor, Karl Friedrich Gegauf, created the world's first hemstitch sewing machine. Being able to sew 100 stitches per minute, it quickly got international attention.

By 1900, Gegauf and his brother, Georg, had employed dozens of people to keep producing more machines as the demand continued to be on the rise. Because of this invention, the mechanical production of hemstitching was given the nickname “gegaufing.” At that point, the hemstitch sewing machine had begun to be sold abroad.

After the death of Karl Friedrich Gegauf in 1928, his son, Fritz Gegauf, took over, leading the company for many decades and defining the brand in ways that continue to have an effect to this day. Under Fritz Gegauf’s leadership, the company released the first sewing machine for domestic use with the Bernina brand name in 1932. The brand is named after Piz Bernina, the highest mountain in the eastern Alps.

In 1959, the company's leadership passed to Gegauf’s daughter, Odette Ueltschi-Gegauf, and by 1979, she had become the company’s new president. The sewing machine line Bernette is also named after her, a combination of her first name and the brand name. Under a new leader, the brand continues to thrive, releasing a sewing machine with electric foot control, the Bernina 830. While it was released in 1971, this model remained the brand’s best seller for the next 11 years.

In 1982, the first model with a stretch stitch function and an especially powerful engine, the Bernina 930, was released. In 1986, Bernina produced the 1130 model, the first computerized sewing machine that had a fully automatic stitch pattern memory and one-step buttonholing.

In 1988, the company changed its leader and remained within the family as Odette’s son Hanspeter Ueltschi took over. Hanspeter Ueltschi remains the leader of Bernina to this day. During his time as Bernina’s leader, the brand became successful in the United States. In 1989, the 1230 model was released with a memory expansion and fully automated buttonholing.

In 2012, the company rebranded to a more modern look, inspired by the introduction of the new 5 Series. The logo also changed, appearing embroidered and supplemented with the slogan “made to create.”

In 2018, the company celebrated 125 years since its founding by Karl Friedrich Gegauf. For this occasion, the company created some limited-edition models with a gold faceplate, as well as two actual gold-plated presser feet and a golden anniversary box.

Staying true to its roots, the Bernina sewing machine headquarters have remained in Steckborn, Switzerland, ever since the company’s founding. Bernina also owns two factories, one being in Steckborn and the other in Thailand.

With locations all over the world, Bernina offers support to all of its customers worldwide. While there is no specific Bernina sewing machine contact number available, customers can find assistance through the company’s website here.

Bernina is an excellent sewing machine brand dedicated to offering great features to its loyal customers worldwide. Let’s take a look at the best Bernina sewing machine in each category.

The Bernina machines are noteworthy for their quality and multifunctionality. However, for someone who has just started experimenting with sewing, perhaps a simpler model might be better. The Bernina 325 has a lot of the popular features professionals look for in a sewing machine, but it is more user-friendly than some of the other machines of the brand.

The threading with this machine is quite a simple process, and it also features excellent stitch control. Its compact and convenient size is also perfect for those who do not have much space available in their home. 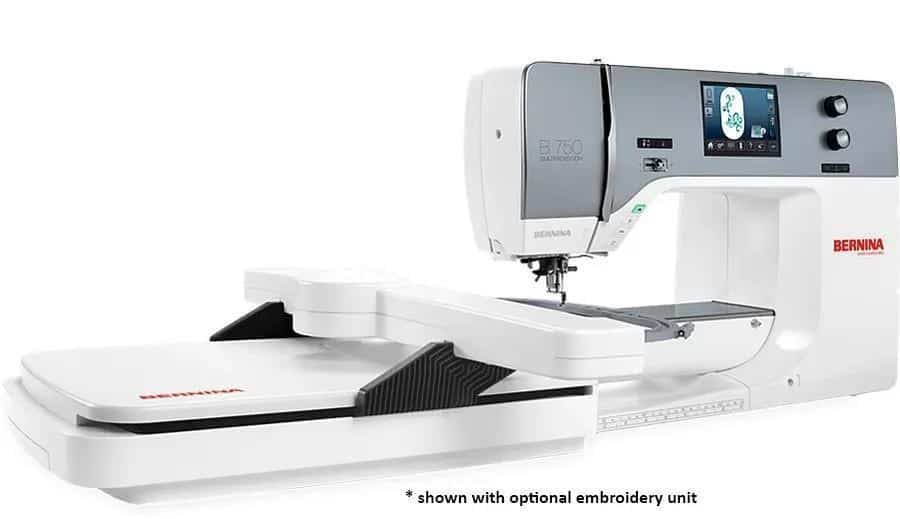 If you are a sewist that tends to experiment with all types of sewing projects and use a lot of different fabrics, then you will need a heavy-duty machine that will successfully get you through each one of your projects.

The Bernina 750 QE is a combination machine perfect for sewing, quilting, and embroidery. The machine has a dual-feed feature that helps you manage all sorts of fabrics. It also comes with a blindstitch foot, designed for sewing blind hems on fabrics with various degrees of thicknesses. 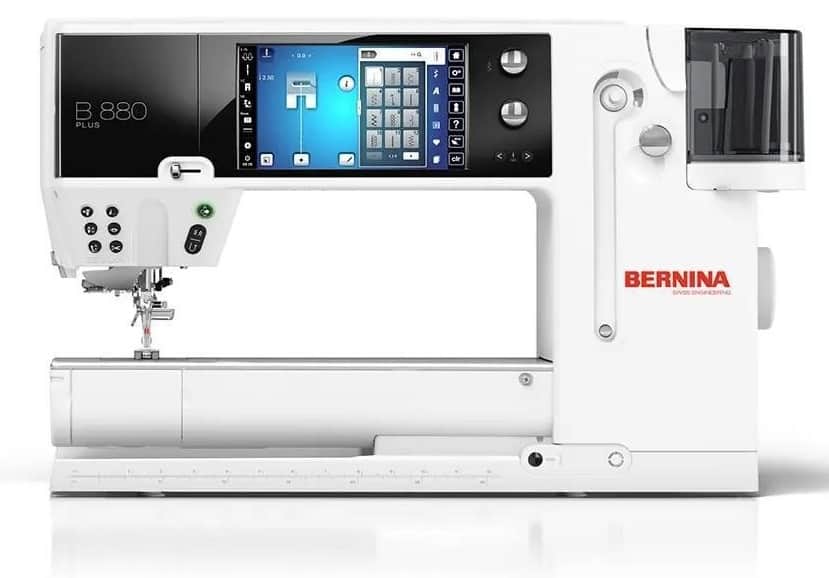 If you are a sewist that truly appreciates smart and convenient features that help you be more effective in your sewing work, then the Bernina 800 Plus is the best sewing machine model for you.

Being one of the brand’s most advanced machines, the Bernina 800 Plus has everything a sewist will ever need and much more.

The pinpoint placement allows you to place your design on the fabric exactly where you want it without using a template. You can access and edit your designs through the touch screen, adding everything you need. 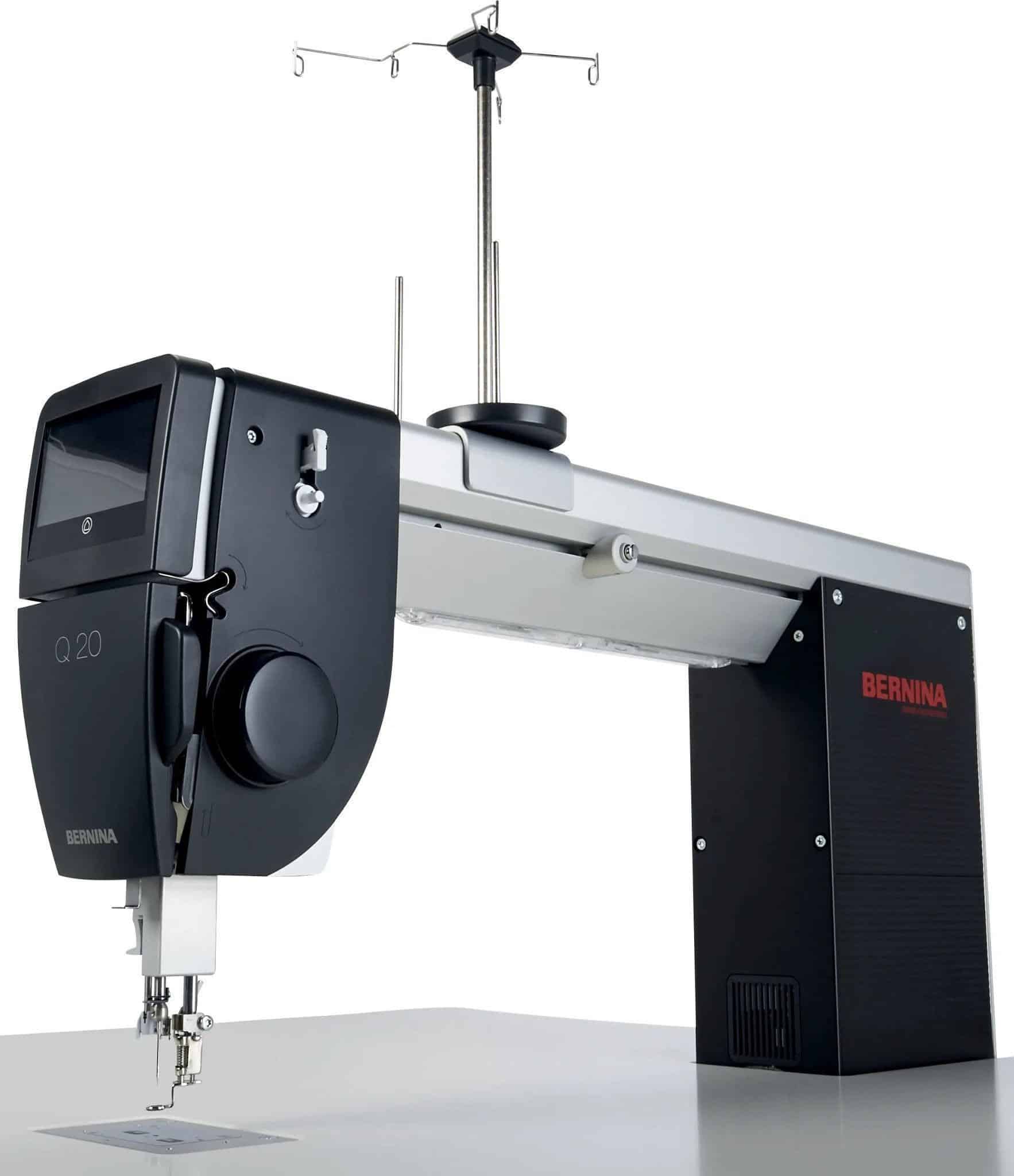 The Bernina Q 20 is the perfect quilting machine for those that seek to create an array of different quilts. This model is large enough, so it will be easy for a quilter to work on big projects. It has a 20″ free arm depth that gives you a vast space to work in.

The stitch regulator allows you to set the stitch length as preferred, and the presser foot tension release system makes it very easy for you to use a variety of thread types. 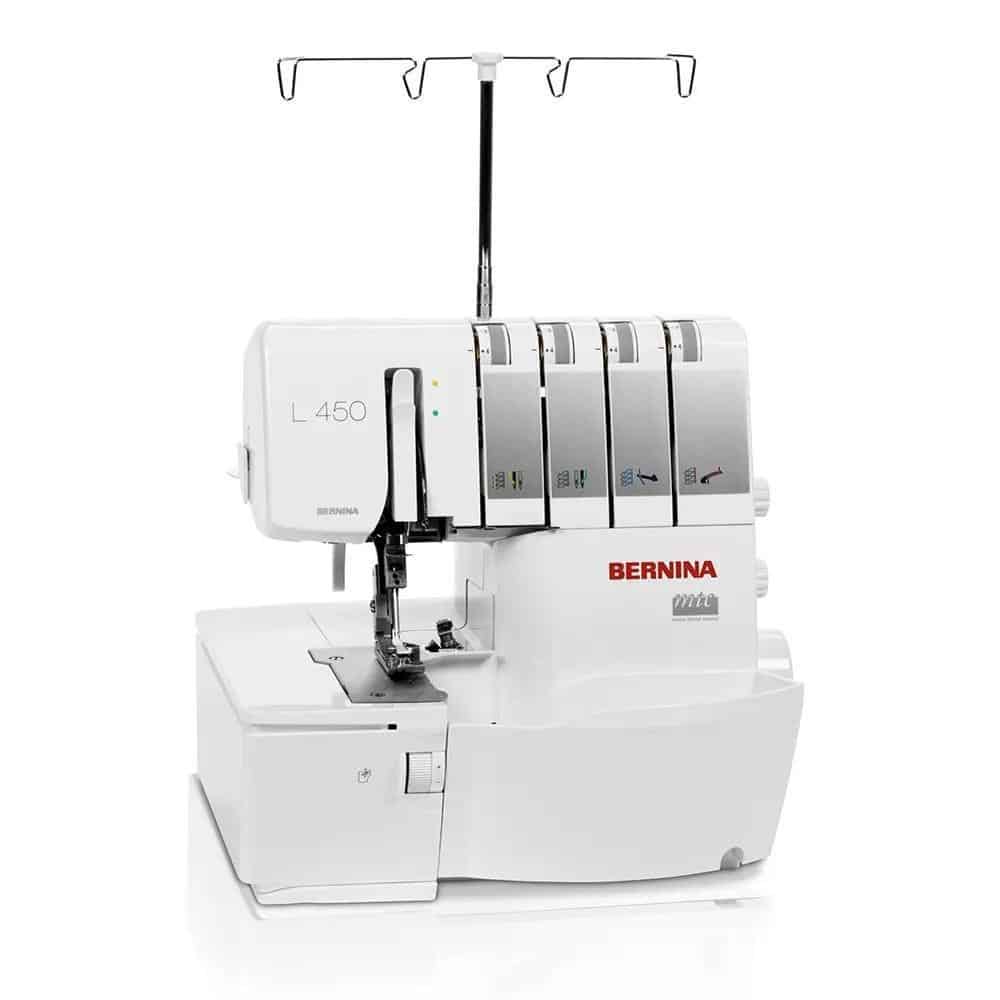 Many people do not traditionally think of using an overlocker when they want to do some basic sewing, but in reality, it can be very helpful. While an overlocker is usually used to finish seams, it is also quite convenient for regular sewing projects.

Its multifunctionality is a great advantage as you can do many things at once with such a machine. Working with an overlocker means saving time and very fast stitching. The L450 serger is very easy to use, giving excellent quality to your creations. 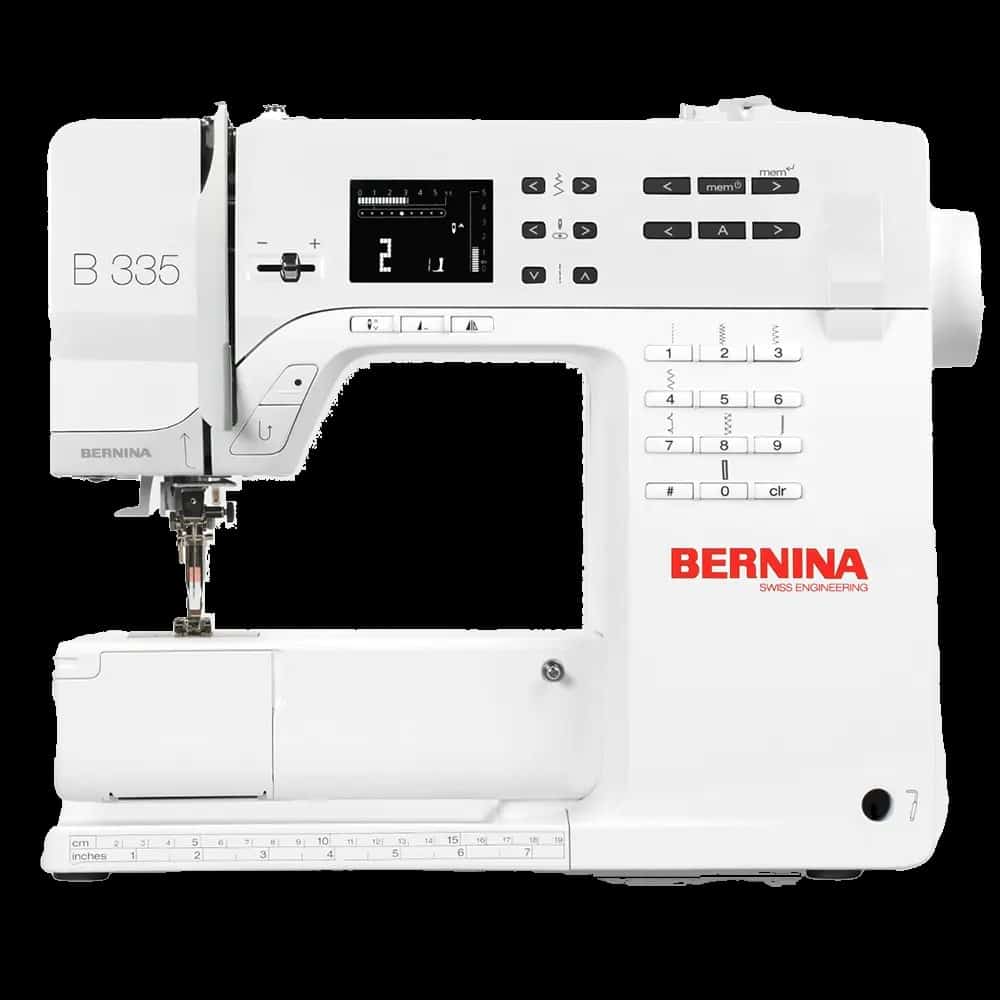 While the Bernina 335 has enough space for you to work on various projects and experiment with your creations, it is also perfectly sized, allowing you to store it and transport it whenever you like comfortably. Moreover, the slide-on extension table gives you even more workspace.

The Free Hand System (FHS) allows you to raise and lower the presser foot by simply using the knee lifter without using your hands, allowing you to perform free-motion sewing.

A productive and effective sewing experience can only be achieved with suitable accessories. Let’s take a look at the best Bernina sewing machine accessories that will help you make unique creations. 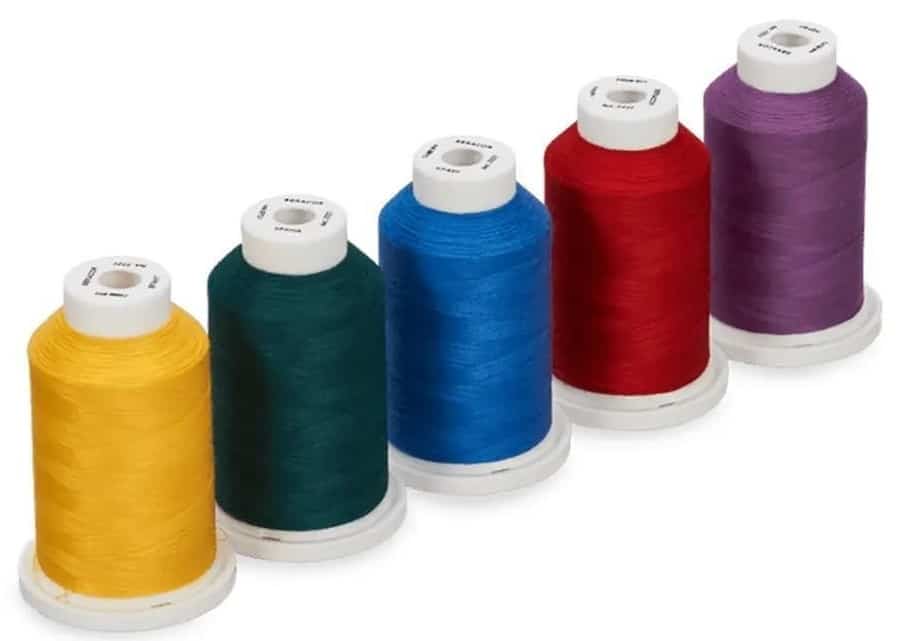 This threading kit includes five spools of 1000m thread. It is an excellent choice for beginners who are interested in learning how to use an overlocker.

The colors of the threads reflect the colors used for the threading paths on the BERNINA sergers, making it easier to understand which thread tension values need to be changed. Generally, most modern sewing machines come pre-lubricated. However, you need to constantly check your machine’s manual to determine if that applies to yours or not. If your machine requires oiling, you need to pay attention to it because if you don’t oil it but keep using your machine, it can lead to severe damage.

Ensure that you get a good-quality sewing oil to use in your machine. This fine-point oiler will make sure to properly oil your sewing machine thanks to its conveniently shaped nozzle explicitly made for this type of use. This will help you avoid over-lubrication or spillage in your working area. 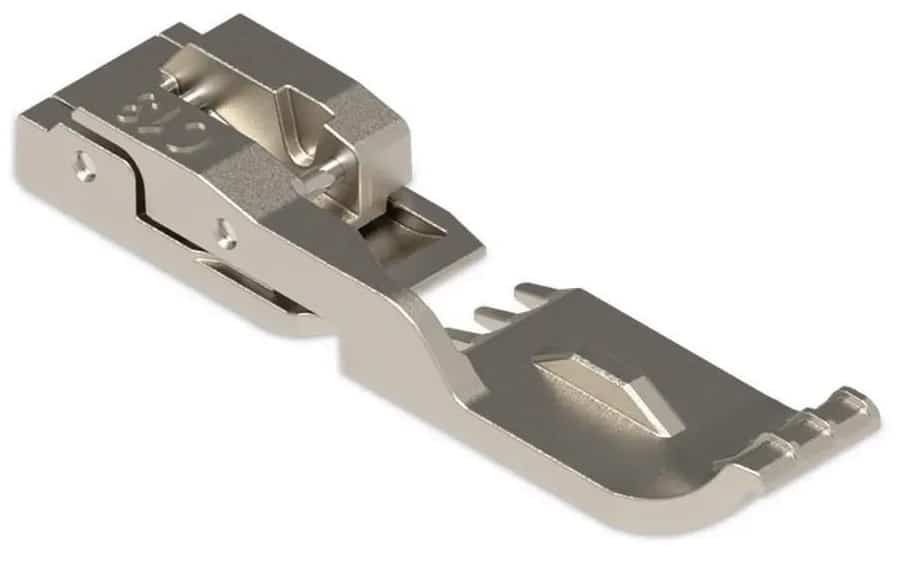 This Cover-/Chainstitch foot is ideal for decorative stitching. It allows for precise stitching, and it improves fabric feeding for flat even seams and hems in knitting and woven material.

This presser foot is compatible with the Bernina L 890 model. 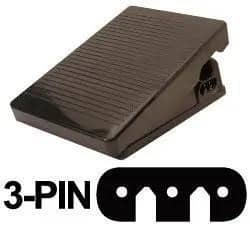 A perfect accessory that will help you control the sewing process to produce fabulous creations precisely as you have imagined them. 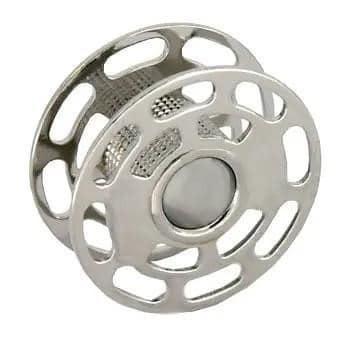 This 20-pack of Bernina rotary bobbins will be exactly what you need to work on your sewing machine effectively.

Bernina is a great Swiss brand that has proved its superior quality during its long 125-year history. Customers worldwide know that Bernina is a brand they can rely on as its products are well-designed and durable.

While prices for a Bernina machine can be higher than the average price in the market, this hasn’t prevented people from still having it as their number one choice for sewing machines. Moreover, its diverse collection offers something for everyone, having sewing machines for beginners, heavy-duty work, computerized or basic, and much more.

Parts of a Sewing Machine: How They Work